Food grown by robots on AI-powered farms. Welcome to summer!

Summer is officially here. Farmers’ markets abound with bins filled with vegetables grown outside in wide open fields and in sunny gardens. But in the future, your food will be grown in an entirely different way, using genetically modified seeds and livestock at a tiny urban farm or big box retailer near you.

The future of farming is here, and it will look a lot different than in years’ past. Think: microfarms housed underground in office buildings and on neighborhood blocks and vertical farms housed in skyscrapers in urban centers. With no soil and no sun, these factories promise 365-day seasons and no threat of droughts, freezes or infestations. They can cultivate lettuce, spinach, basil, garlic and snow peas in the middle of cities––and often deliver 10 to 20 times the yield of conventional farms. All this, using robots, sensors, artificial intelligence, LED lights, better genomic editing, vertical staking techniques and more advanced hydroponic grow systems.

Why futurists care about the future of AgTech: Advances in agriculture tech intersect with lots of other fields, including artificial intelligence, robotics, biotech (like CRISPR), nanotech (microscopic, injectable robotics), augmented reality, self-driving vehicles, and drones. Development in any of these fields is often tied to experimentation and research in AgTech. But changes in the global supply of food tends to impact geopolitical and economic stability.

Why you, personally, should pay attention to AgTech: If you’re a human who eats food, you should care deeply about the global food supply. Our global weather patterns and climates are in flux. It’s plausible that the world’s agricultural centers today won’t be capable of sustaining commercial farms in the near-future. That means a dramatic shift in human migration. A recent study by the Environmental Justice Foundation (EJF) says that tens of thousands of Bangladeshi families could soon face becoming climate refugees within their own countries. It’s a problem that could soon get worse—a one-meter sea level rise could result in a 20% loss of Bangladesh’s current landmass. And it’s not just Bangladesh at risk.

Why non-agriculture companies should track AgTech trends: AgTech will mean huge opportunities for businesses and organizations who prepare in advance. For example, CRISPR/Cas9 gene-editing technology could be used to develop breeds of tomatoes, beans, kale, blueberries, quinoa, spinach and broccoli that can be grown inside of a neighborhood 7-Eleven store––or inside of a suburban retailer like Wal-Mart. Growing and selling directly to consumers could bring fresh, inexpensive produce to food deserts year-round. Adjacent industries would likely benefit (spice makers like McCormick & Co., appliance manufacturers like Samsung). It could also mean new competition from unusual sources: Amazon acquired Whole Foods in 2017. It’s plausible that by 2027, Amazon could begin converting Whole Food stores into community farms––where Amazon owns the entire supply chain, including the augmented seeds used to grow the apples it puts in its pies.

What, exactly, you should be tracking: AgTech includes a wide variety of emerging technologies. Take a look at the AgTech section of this year’s Emerging Tech Trends Report for a shortlist. Modern Farmer does a terrific job explaining the future of food and agriculture.

Examples: Researchers at the Massachusetts Institute of Technology now crunch data to come up with “plant recipes” that can improve indoor food production even more. Using complex algorithms and sensors attached to plants growing in hydroponic systems, the researchers track everything from carbon dioxide and temperature to water and plant tissue health to analyze the best conditions and systems for growing the most nutritious, tasty foods possible. A team of scientists from Purdue University and the Chinese Academy of Sciences used CRISPR/Cas9 gene-editing technology to develop a variety of rice that produces 25-31% more grain and would have been virtually impossible to create through traditional breeding methods.

Meanwhile, Japan has emerged a world leader in AgTech with 200 indoor farms and government funding. One Kansai Science City microfarm in Japan uses artificial intelligence and collaborative robots to grow the crops, handling everything from raising seedlings and replanting to watering, adjusting the light and harvesting.

In London, a startup called Growing Underground raises pea shoots, red basil, garlic and chives on “cardboard carpets” using 77% less water than conventional agriculture because the water is recycled. Crops can be harvested to ship in just five to 10 days, and that kind of efficiency will allow Underground to double operations next year inside city’s network of underground tunnels. 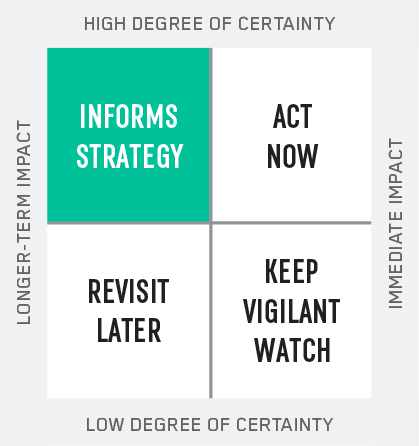 Take Our Global Media Futures Survey
We’re conducting this annual international survey to better understand how those working within media and journalism think about the future. We hope to learn how frequently journalists and those within media leadership positions think 5, 10, 20, 30+ years into the future––and how often they engage futures thinking. We also hope to learn how directly futures thinking correlates with the current business models, newsroom projects, media innovation, investments in talent and cross-industry partnerships. If you work in media (in any position), we want your opinion! Begin survey.

Summer Futures Quarterly Submissions
Once a quarter, FTI produces a quarterly journal featuring new books, essays, podcasts and shows — all in an effort to help you think more broadly about the future. Read/ seen/ listened to something amazing and want to share it with the world? Or have you written/ recorded/ created something that others should see? Submit it to our Futures Quarterly picker!

Leading With Foresight
The latest issue of MT Magazine profiles the Future Today Institute and our foresight methodology. We explain how managers and executives can lead with foresight. Read it here (article is in Dutch).