Nanobot nurses and robot docs made from your DNA

Who remembers “Mitochondrial Eve“? If you were an 90s kid, you probably learned in school that she lived in Africa sometime between 150,000 to 200,000 years ago and was all of humanity’s mom. She got her name because mitochondrial DNA is the unique genetic code that’s passed down, and at some point during human evolution, our single cell organism “mom” probably engulfed another bacteria and eventually evolved from there. Evidence of Eve (along with other data and artifacts) is what helped scientists postulate that all humans originated from just one single ancestral group in Africa. That is, until this week when researchers at Oxford University’s School of Archaeology revealed an alternate story of how our DNA evolved: our species emerged from many isolated populations around Africa, over time got together to interbreed, and eventually all that diversity produced modern humans. What this means is that while all of humanity’s DNA is linked, we probably didn’t all come from a single cradle in sub-Saharan Africa at just one moment in time.

The message: We need to look at the evolution of modern humans in a different light.

And the lesson: Given what we know about genetic editing and artificial intelligence, we should start thinking about how we humans evolve from here.

That’s because an entirely new generation of robots –– made of DNA –– are on the horizon. Eventually, these molecular robotics will be commonplace, used to deliver targeted medicines inside your body, detect cancer and even tweak your genes.

I wasn’t really paying attention in biology. Remind me what we’re talking about? DNA, made up of four nucleotide molecules in a sequence, acts as a code that can be edited, written and programmed, much like software. And, scientists at Harvard’s Wyss Institute for Biologically Inspired Engineering also discovered that ­DNA can also be designed and controlled––just like next-gen robots made of hardware––in which pairs of strands can self-assemble and react to their environments. Armies of tiny robots policing our bodies has long been a theme in science fiction, including the 1966 Film Fantastic Voyage in which scientists themselves were shrunk and injected into the bloodstream of a colleague. In reality, scientists have pursued medical bots for decades using traditional nanotechnology, envisioning robots made of simpler materials, like carbon atoms, and that swim in your bloodstream and fix problems they find.

What this means for you and your body: Scientists didn’t fully see the power of DNA bots until a decade ago when California Institute of Technology researchers coined the term “DNA origami,” after learning to “fold” DNA into complex shapes, using a process which essentially involves slowly cooling a test tube of water and hundreds (now thousands) of component DNA strands. Through trial and error, DNA strands rearrange and ultimately assemble into whatever shapes scientists program in their sequence, like one long strand of DNA, which is capable of self-folding, to create single-stranded origami shapes. Scientists at the National Center for Nanoscience in Beijing and Arizona State University used DNA technology to develop a vehicle that delivers doxorubicin, an anti-cancer drug. And researchers at CalTech recently created bots that pick up and move molecular cargo to designated holding areas––perhaps the most robot-like product so far.  It’s not just all about DNA. It turns out both RNA and proteins can be used, too, and both can be produced inside of living cells.

Why futurists care about nanotechnologies: This could very well be a next step in the evolution of our species––bridging humans with biological robots, as well as with other species on Earth. For many people, the transition could happen within our lifetimes. It’s plausible that in addition to people living longer with targeted therapies, we could wind up with new, genetic chimera that are heritable and can be passed along to future generations. Think: humans enhanced with a dog’s sense of smell or the super-sight of a mantis shrimp.

Key Insight: The field of molecular robotics has exploded, as the technology to design assemblies and manufacture DNA components advances and becomes even more cost effective.

Examples: Harvard University spawned NuProbe, a Shanghai startup that aims to use DNA bots to detect cancer signatures in the blood earlier––ideally before the cancer cells are large enough to be seen on a CAT-scan and prior to the appearance of symptoms. Another Harvard-born startup, Ultivue, uses high-resolution microscopy techniques to detect diseases through DNA-based bots.

What’s Next: The field is young but growing. We will start to see sperm-inspired microbots, bacteria-powered bots, magnetic nano-particles, and even DNA-driven nano-rockets for targeted drug delivery. 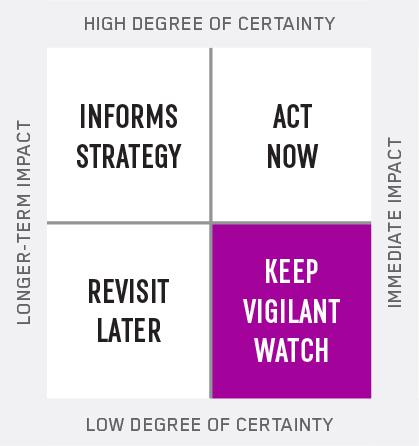 Take Our Global Media Futures Survey
We’re now conducting our annual international survey to better understand how those working within media and journalism think about the future. If you work in media (in any position), we want your opinion! It should only take you 10-15 minutes. Begin survey.

Summer Futures Quarterly Submissions
Once a quarter, FTI produces a quarterly journal featuring new books, essays, podcasts and shows — all in an effort to help you think more broadly about the future. Read/ seen/ listened to something amazing and want to share it with the world? Or have you written/ recorded/ created something that others should see? Submit it to our Futures Quarterly picker!

The Future of Food
FTI spoke with WYPR’s Sheilah Kast about genetic editing, the future of our food supply and the sci-fi feel of agricultural technology developments. Listen or download here.