A decade ago, I began creating an end-of-year inventory of signals, outliers and trends in an effort to hit January 1st running. Of all the decisions made in the past year, which would have lasting impact in the coming months? Which big upcoming anniversaries and events might cause an acceleration of change? Were there inflection points lurking around corners? What uncertainties could I identify now and begin to prepare for? Far from being a nostalgic look back at what was or might have been, or a list of predictions for what would definitely happen, this inventory was something entirely different: a way to think about the evolution of technology, science and humanity as a long continuum.

I started sharing my end of year inventory with the Future Today Institute’s clients, who found it to be an invaluable resource. I also found out about a clever hack: our clients were using the inventory as a companion to our annual Emerging Tech Trends report to aid in their strategic planning for the year ahead.

So for our last FTI newsletter of 2018, I’m sharing the inventory with you. I’ll warn you in advance: this is a very long email. Keep it in your inbox or download and save the PDF version. The point is not to breeze through what’s here, but to refer back to it often. Our goal is to find patterns and confront uncertainty often. We like to save surprises for the holidays –– we hope they come gift wrapped and bring cheer, delight and joy.

First, a look back.

Lots of decisions were made in 2018 –– some which were entirely or partially within our control and others that were made on our behalf, or in secret, or areas of the world unknown to us. We won’t know the outcomes immediately, but we do know that every decision made influences the future. It’s important to track these decisions and ask: what impact could this decision have on delivering our preferred futures? Which stakeholders will benefit/ lose? What are the risks and opportunities that could unfold?

Our 12th annual Emerging Tech Trends Report launches in March 2019. We are currently tracking 300 trends across 25 different industry sectors. Here’s an inventory of some of our initial key findings for 2019:

A few key anniversaries and events to keep on your radar

Leaders often make common errors as they make strategic decisions about the future: they under-predict or over-predict change. The reason? Most of us find uncertainty uncomfortable, so we are reluctant to confront it. We can’t solve for future uncertainty, but we can prepare ourselves to think critically about signals and decisions –– to understand all the dependencies we should consider that might impact the future.

I use my inventory to create axes of uncertainty. I use the bullet points from the Look Back section above and write two possible, opposite outcomes like this:

Then, I create a matrix of uncertainty, like this: 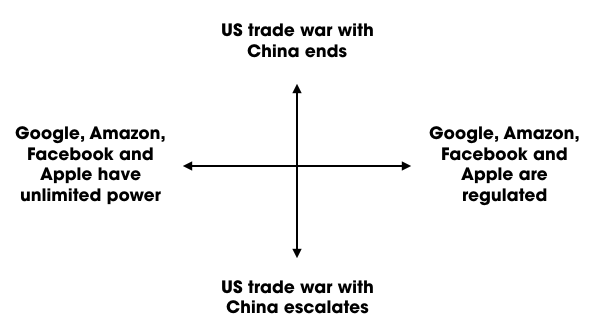 I mix and match bullet points and signals to create lot of different axes, which I use to contemplate the coming year. I’d encourage you to do the same, and to tailor the axes to your organization specifically by adding your own uncertainties. What would the outcomes of each quadrant look like for your organization? Your community? You, personally?

Our FTI clients are always thinking about the future. But most often, the established planning timeframes aren’t optimized for strategic foresight. Executive leadership get into a rut of three to five-year planning routines, or they believe that planning beyond five years is simply pointless given all the technological disruption. This is a common blindspot for many organizations.

To effectively plan for the future, organizations need to learn how to swim in different lanes simultaneously. For any given uncertainty about the future — whether that’s risk, opportunity or growth — leaders must think strategically about tactics, strategy, vision and systems-level change. In practical terms, this means that you need to think about uncertainty in 2019 at the same time you’re planning for 2024, 2029 and even 2039.

For example, your organization might be wondering about the future of artificial intelligence. To effectively plan for the future, you must research and plan for the next 12-36 months (tactics), 3-5 years (strategy), 5-10 years (vision) and 10+ years (how AI might cause systems-level change, or how your organization could catalyze that change for your benefit).

This is the map we use with our FTI clients. With the uncertainties and decisions in our inventory, how will you position your strategic thinking differently in 2019? 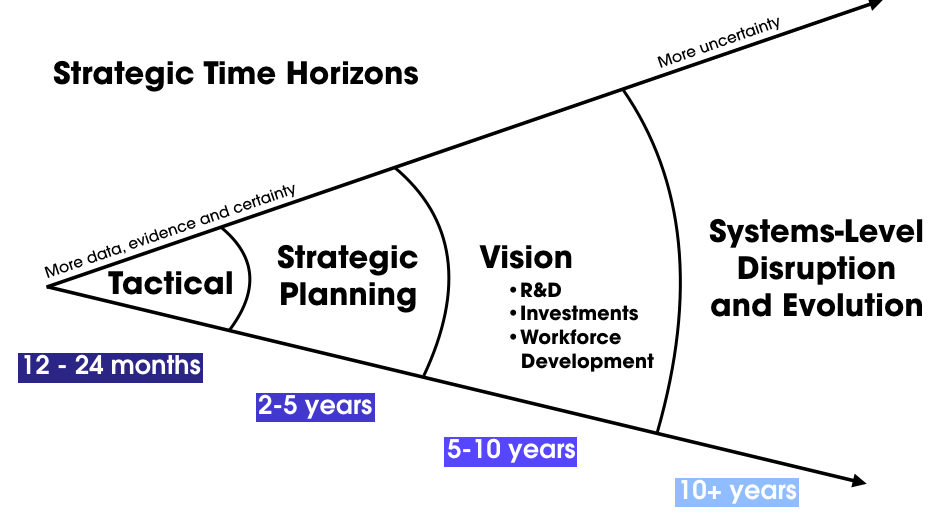 We cannot know exactly what the future holds –– which is an excellent reason to track signals and decisions not just at the end of the year, but all year long. Don’t wait for your next big quarterly meeting to make decisions. Broaden your thinking, look for intersecting vectors of change and figure out ways to make incremental decisions as often as possible.

At the end of every year, I also like to take a personal inventory of the people and organizations who support and elevate our work at FTI. I would like to thank Stern Strategy Group, and especially Danny Stern and Mel Blake, who are wonderful business partners and have been the primary drivers of our growth. Jennifer Alsever and her partner Doug Brown at Campfire Content have assisted us with our newsletters and reports this year, and they’ve been an invaluable resource. Des Dearlove and Stuart Crainer at Thinkers50 have connected me with world class strategists who have helped broaden and enrich my own thinking. To all of them, and to you our readers, I’d like to offer my deepest appreciation.

We are preparing for a very busy Q1. Here’s where we’ll be just after the new year:

World Economic Forum: We’ll be in Davos all week. FTI’s Amy Webb is speaking on several panels. If you’re going to be there, please let us know if you and your team would like to meet up.

National Association of Broadcasters: We’ll be speaking with industry leaders about the results of our future of broadcasting workshop series.

Company Conferences: We’ll be at internal conferences for PricewaterhouseCoopers and the GAO in February.

SXSW: The launch of FTI’s 12th annual Emerging Tech Trends Report in March at the South by Southwest festival in Austin.

How To Think About Time